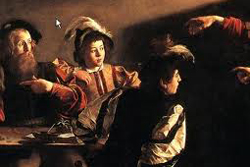 During the early decades of the 1600s, the realistic style of Caravaggio upsets the artistic circles in Rome and influences the style of painting of the European artists.
A controversial artist when he was alive, today all the scholars agree his art stands alone in its quality and originality. Rome contains a large selection of his works, visible inside churches and museums.
In this tour we focus specifically on Caravaggio’s work that lies in the places that they were originally created for: we will see the celebrated series of Saint Matthew in the church of St Luigi de’ Francesi, the Pilgrim’s Madonna in the church of St Agostino and the Cerasi Chapel in Santa Maria del Popolo.
We will be extremely involved in the dramatic spirituality of Caravaggio but also will discover many other splendid works of art.